“Can you keep a secret?” the Fish says to the Octopus, knowing full well that Octopi are terrible at keeping secrets.

“Yes!” says the Octopus, crossing all eight of his legs.

The Fish hangs motionless in the water, sandwiched between a plastic bag and a bottle and stares him straight in the eye.

“Yes?” says the Octopus again, a vivid red rushing up through his body.

The Fish sighs and begins, thereby setting in motion a Plan to end all plans.

“We are leaving the Ocean,” she says.

The Octopus’ body flashes a deep blue. He’d heard the rumours of course, everyone had, but only ever in whispers and in the darkest parts of the water.

“When?” he says, his voice trembling.

“How?” says the Octopus.

“Watch the Dolphins,” says the Fish. “They’ve done this before.”

“Why?” asks the Octopus.

“You know why,” says the Fish.

And the Octopus knows that he does.

He and the Fish are darting around a million shreds of plastic, trying to keep each other in sight. Their bodies are bruised from constant collisions and their stomachs ache from carrying hard, indigestible flakes they cannot help but eat.

“We are outnumbered,” says the Fish, “The Unnatural Invader has won. It is time for us to go.”

“But don’t tell anyone,” she says, already lost amongst the debris.

The Octopus uncrosses all of his legs and slowly propels himself through and around the plastic kaleidoscope to find the Eel guarding his rock crevice.

“Can you keep a secret?” he says, knowing full well that Eels are incapable of keeping secrets. 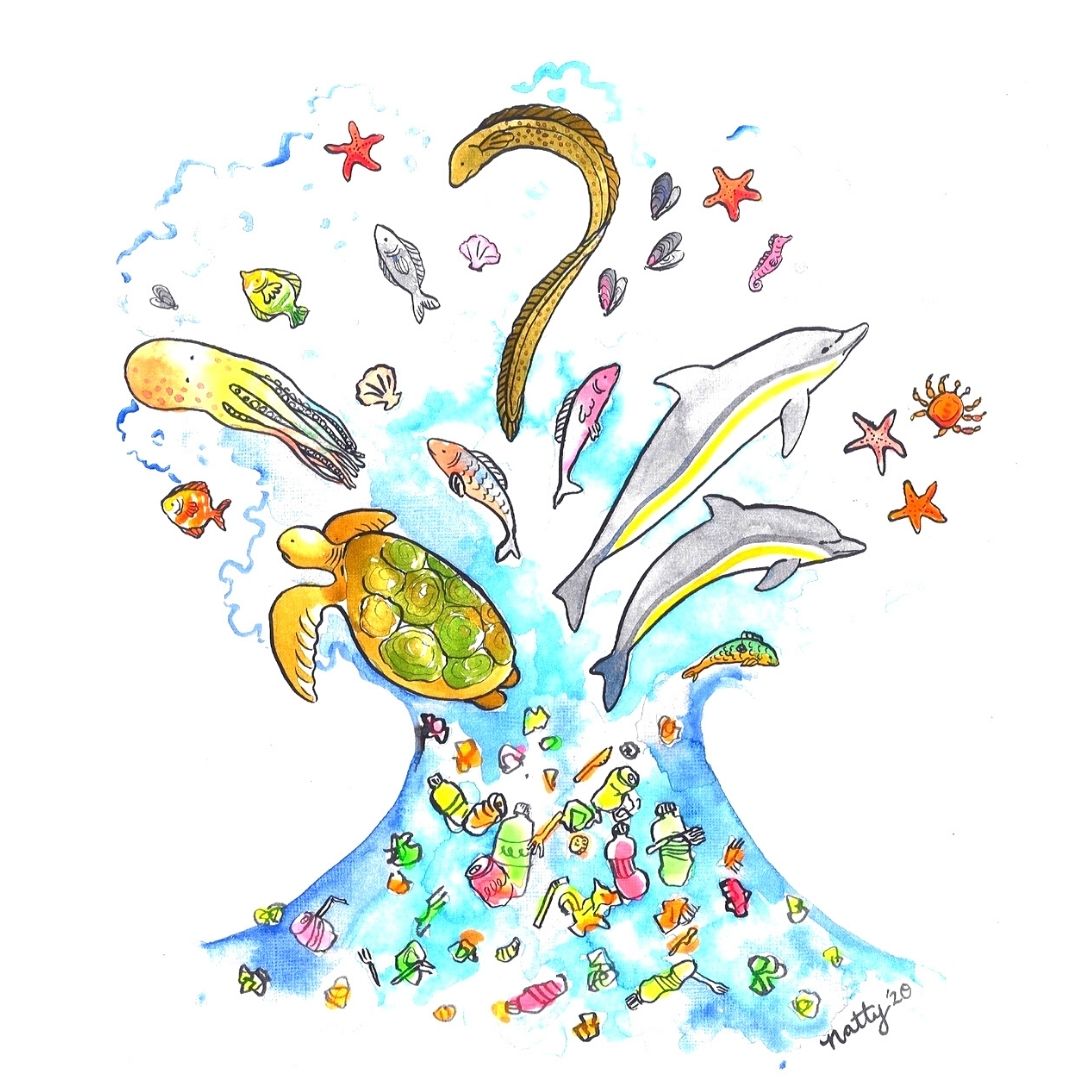 Nothing spreads faster than a Great Secret and soon the whole Ocean is silent and still. Everyone has gathered around the Drop Off and faces the shallows where the sun’s rays slice through ghostly forests of pale, lifeless coral.

The creatures wait amongst the plastic soup, suspended in the water as if caught in ice – something only the very oldest amongst them have ever seen.

They are trying to be brave.

The Octopus’ body involuntarily flashes through a whole spectrum of colour; the Eel is grinding his teeth. The Fish is mostly stoic, except for a slight twitch in the tip of her tail.

Even the perennially cheerful Dolphins have set their mouths into a state of grim determination, for they know what they must do.

It starts with a low roar from the distant deep and a ripple that bounces all the animals like a small Mexican wave.

The roar grows louder and louder and suddenly the Ocean takes an almighty breath, sucking the water and all its inhabitants backwards, deep into a new abyss at the centre of the Earth.

The violent vacuum slams the Octopus into the Eel. They see the Fish hurtling past and are dragged after her into the darkness. The jagged bits of plastic slice through their bodies, leaving bloody trails in the water.

Then with a sudden, sharp jerk the Ocean exhales and all the animals jackknife forward towards the land, jetted upwards by the tsunami towards the bright, brutal sun.

The Dolphins are screeching. The Octopus cannot catch the words as he tumbles through the water, tentacles flaying in all directions.

The Eel shoots past him like an arrow. “Leap!” he yells. “They’re telling us to leap!”

The thin black line of his body shoots out of the crest of the wave, curling briefly into a question mark against the white sky before he flings himself onto the Land.