“Sit down, we need to talk,” The Tree said to The Girl.

She looked around. There was nothing to sit on and The Tree had drawn up its lower branches in a clear signal she was not welcome there.

No-one sat on the ground anymore.

The Earth was covered with piles, ankle-deep, of loose, jagged pieces of plastic. Sometimes you could make out a whole plastic bottle, a coffee cup lid, a spoon. But most of it had flaked into bits that you could swish through like a pile of autumn leaves.

At least that was what The Girl had heard it was like.

“Sit down,” ordered The Tree again.

A sharp gust of wind knocked The Girl backwards, sending her sprawling into the plastic and cutting the palm of her hand on the sharp edge of a tray lid.

The wind had turned the air cloudy with fumes that made her choke.

When her coughing subsided, she pushed herself up on her elbows and looked up at The Tree.

“We are all dead,” it said. “There’s nothing more we can do. You have killed us all.”

Tears ran down The Girl’s face. She’d known this moment would come, they all had. But what could they have done?

“Anything,” said The Tree. “Anything to stop this,” it spread out its lower branches over the carpet of bright, synthetic colours. So pretty to look at. So lethal to live with.

“Anything is better than nothing. But you did nothing. So now we are at The End.”

Drops of water spattered on The Girl’s face as the sea sneezed and a giant wave crashed down.

Dead fish flopped at The Girl’s feet. She didn’t flinch. You couldn’t walk three steps these days without treading on dead animals rotting in their plastic tombs.

The Girl couldn’t argue. There was no defense. The Tree was right. They’d done nothing despite all the warnings.

The year was 20-53. It had taken them 100 years to kill The Earth with a product that had made them lazy and selfish and stupid.

They’d thought this manufactured material was better than anything found in the Natural World and for a while it did make life easier.

But like all things that seem too good to be true, there is a price to pay eventually. 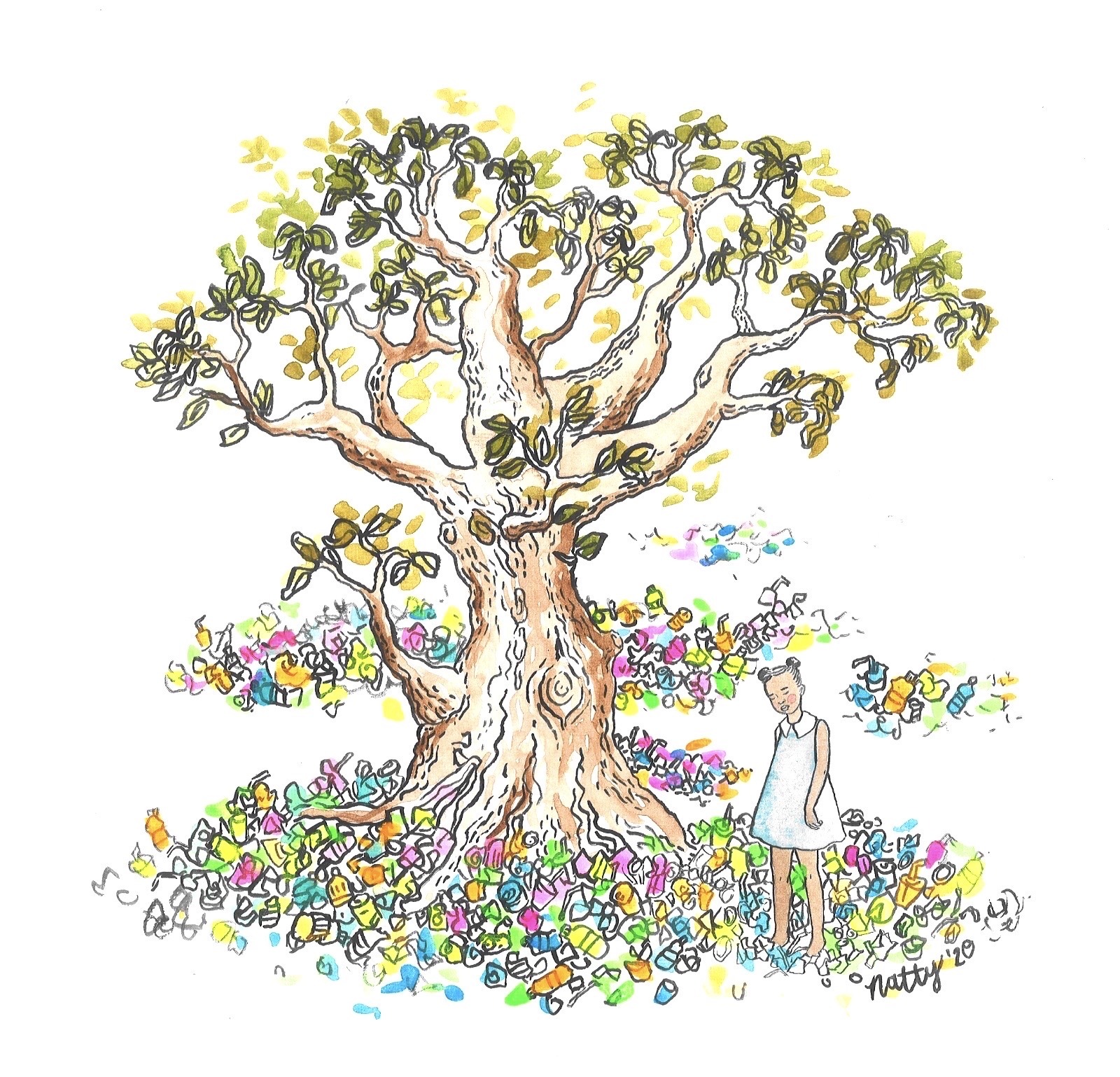 And this was it. The Natural World – what was left of it – was turning its back on them, no longer choosing to fight for the right to survive.

“What do we have left?” asked The Girl.

“Anything you have made,” said The Tree.

“You have your buildings, your cars, your hothouse GM crops. You have your test tube animals and of course you have your plastic. You can keep living if you want.”

The Girl thought for a moment.

“Then you can come with me,” said The Tree and it reached out its branch.

The Girl hesitated for just a second, then pulled herself onto the branch and The Tree hugged her in tight.