I’m standing next to an apiary on the edge of a dirt track 40 kilometers west of Doha, sweltering in a protective bee suit.

The stack of beehives nestles under date palms, wattle and a sidr tree. There are crops of vegetables nearby. It feels like a good place for honey bees.

“Stand back,” warns Cris, the beekeeper. “The bees get upset and aggressive when we open the hive.” He looks critically at my flip flops, “You might get stung.”

Cris brandishes a sort of smoking watering can and puffs a few wafts of smoke into the top of one of the wooden boxes.

When a great swirling mass of angry bees doesn’t emerge, I inch closer and see hundreds of them crawling quickly over frames of honeycomb. The smoke has panicked the colony into thinking there’s a fire and the bees are too preoccupied saving precious honey to worry about us peering in on them.

Bees make honey to eat and any excess is their store for the winter months. But in Cris’ hives, there’s barely any honey to be saved. He has taken most of it – harvesting eight out of every ten kilos the bees produce. He’s replaced it with sugar syrup, a common practice amongst beekeepers. The syrup keeps the bees alive, but lacks many of the nutrients found in honey. It’s like fast food. The bees won’t die, but they’re not very healthy either. 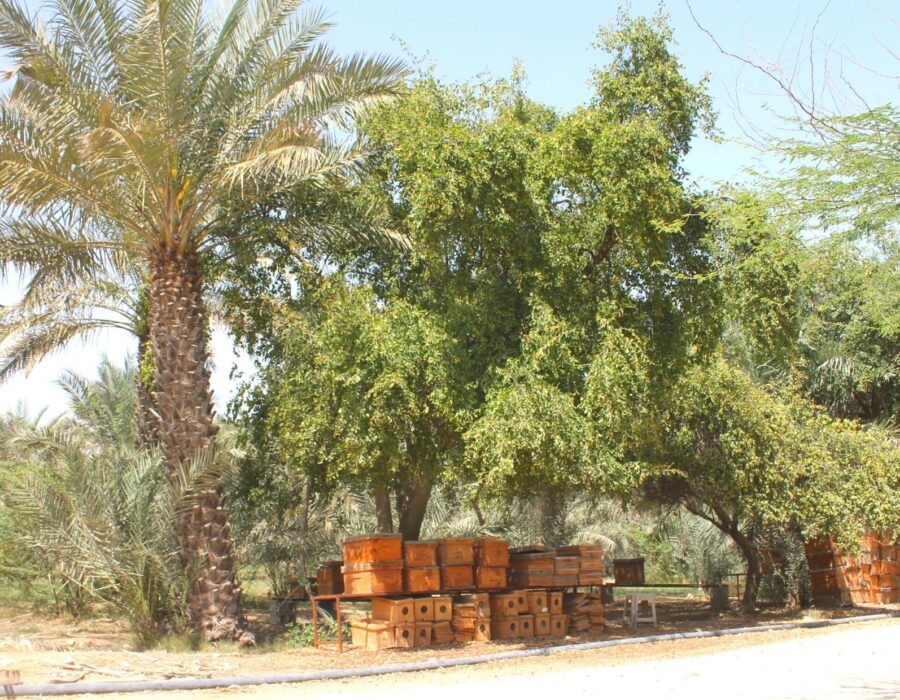 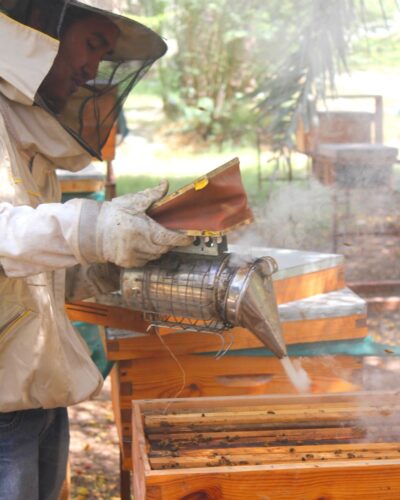 Bu Saif Apiaries is Qatar’s leading honey producer. It’s owned by Khalid al Suwaidi, who has around a thousand hives throughout the country, some of them out in the desert. In a good year, he produces 16 tonnes of honey, all of it sold locally.

“We are thieves if we take the honey,” Khalid admits. “The bees work hard to make it.”

We’ve been doing this thieving for thousands of years. Records show prehistoric man using honey in 15,000 BC. But it was only last century that we began keeping bees to make honey on an industrial scale, and as with all factory farming, the animals suffer.

My interest in beekeeping began a few weeks ago, when my brother’s girlfriend Sarah dropped a bombshell.

“I don’t eat honey,” she said. “They cut off the bees’ wings. They artificially inseminate the queen. And then they burn the hive with the bees in it at the end of the season.”

It’s difficult to get a clear picture of which companies actually employ these methods, but in the Ethical Consumer’s guide to honey, big UK supermarket brands, as well as the old family favourite, Gales, score the worst for not having a bee welfare policy.

Khalid Al Suwaidi doesn’t cut off the bees’ wings, artificially inseminate the queen nor burn his hives. He is in fact, passionate about his bees and has kept them since he was seven years old.

But he’s been criticized for his colonies having poor survival rates and for having to restock his hives every year with bees from Egypt, a hardy breed that can best withstand Qatar’s searing summer heat.

Tony Smith, who keeps bees on his balcony near the old airport, says Khalid has more hives than the desert environment can support. “A year with good rain produces one or two months worth of food in Qatar” he says. “Bu Saif does not leave its bees with enough honey to get through leaner months. The hives don’t have enough food.”

Khalid does not agree. He is sure he has the correct number of trees for his hives and says bees can travel up to six kilometres in search of nectar. They visit tens of thousands of flowers to produce just one teaspoon of honey. It takes 12 bees their entire lifetimes to make what you might lick off your knife in one sitting. 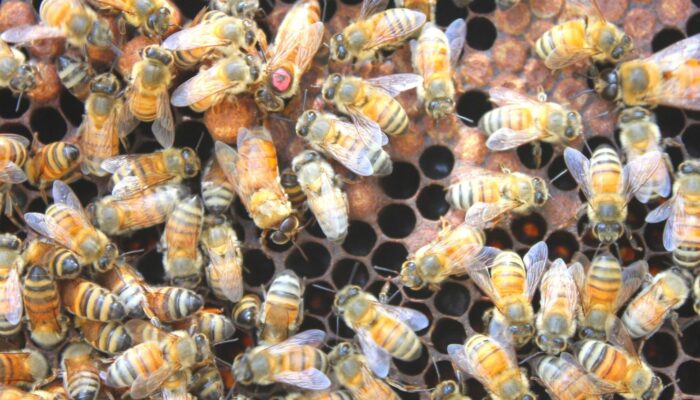 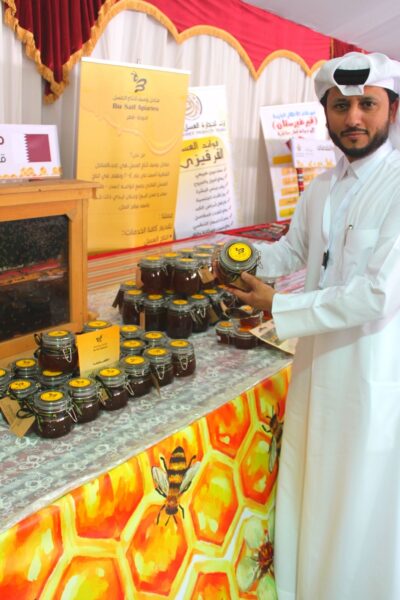 This year Khalid has a problem. The blockade means he can no longer get new bees from Egypt. But it doesn’t stop dozens of honey sellers turning up to Khalid’s first-ever Honey Bazaar. The double marquee in Souk Waqif is full of tables stacked with jars from all over the Middle East and as far as Kazakhstan.

“This place was buzzing over the weekend,” quips Khalid.

He takes me to sample some honey from Libya, a special type for diabetics. It’s dark and bitter, and completely sold out, making the sellers’ 16-hour journey to circumnavigate the blockade very much worth their while.

Tony believes the blockade is a chance for Khalid to be more self-sufficient. He says he doesn’t need to import new bees every year if he keeps his colonies healthy and rears his own queens.

Khalid destroys his queen cells, a way of keeping the colony intact that is less cruel than cutting off the queen’s wings. But both methods prevent the bees reproducing in a process called swarming. The queen flies out of the hive to mate with several drones, then returns to lay her eggs, one of which will be reared as the hive’s new queen. The old queen then leaves, taking half the bees and half the honey with her to set up a new colony.

Almost all beekeepers prevent swarming and Khalid admits it’s not great for the bees. “Yes it upsets them,” he says. “Nature wants to reproduce.”

So with all this unnatural pressure on a hive to produce honey that the bees don’t even get to eat, is it possible for us to eat it with a clear conscience?

“The only way,” says Tony, “Is to get your own hive and never take more than the bees can spare.”

In the meantime, only buy honey from quality brands and give it the full appreciation it deserves.