Billy loved millk. He drank a glass in the morning, a glass at night and even mixed it with ice cream to make delicious chocolate shakes. Every night when Billy was fast asleep, his mummy tossed all the empty milk bottles into the bin with all the other rubbish. A big truck came to take them away and the bottles would disappear, as if by magic.

Then one night, something strange happened.

Billy suddenly woke up. His bed was shaking! He opened his eyes and…

Billy jumped with fright. There in front of him, bouncing up and down, was a plastic milk bottle! This was no ordinary milk bottle. It had eyes, a mouth, arms and legs and its top was a little red hat with a flower on it.

“Hi Billy!” smiled the milk bottle. It somersaulted in the air, “Sorry to wake you!”

Billy looked at the bottle. Was it really talking?

“Save you from what?” Billy asked.

“From the bin!” Susu exclaimed.  “From a miserable life in that stinky, slimy, soggy swamp of sludge!”

“But I have to put you in the bin” Billy said. ”My mummy says it’s wrong to litter!”

“Yes it is!” said Susu with a wink. “But come with me, I want to show you something.”

Before he could say “milkshake”, Billy was up in the air grabbing round Susu’s middle as they flew through the open window into the night sky.

“This is fun!” laughed Billy, the wind flapping at his pyjamas.

But suddenly, out of nowhere, came a giant mountain of rubbish, taller than his own house.  The smell was terrible, like rotten eggs and smelly feet.  The air was filled with the sound of crying. 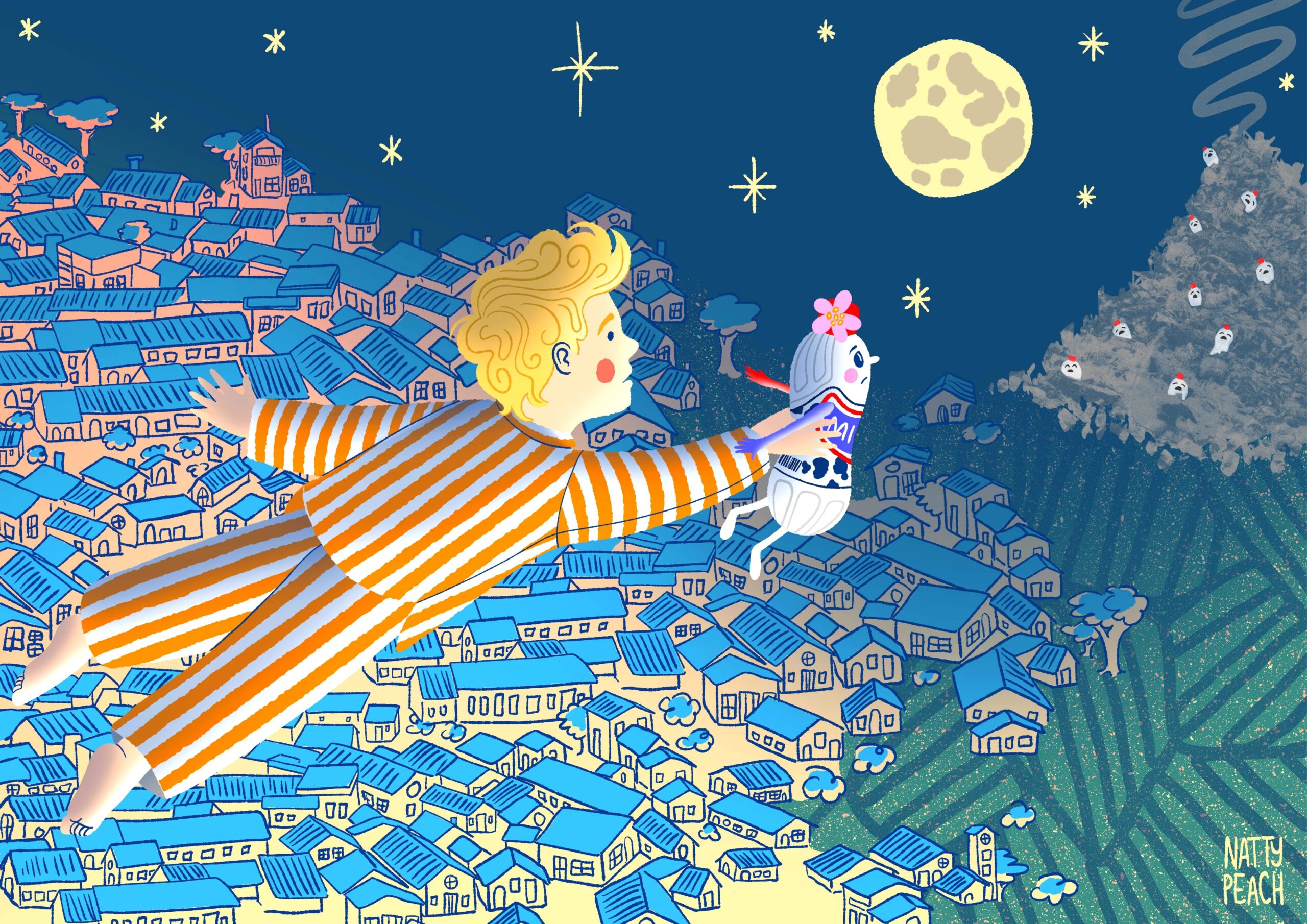 “Do you hear that Billy?” asked Susu. “This is called a landfill.  And that’s the sound of plastic bottles, like me. They’re crying because they’re scared. They don’t belong in a place like this.”

The smell was so bad Billy thought he might be sick. He saw a truck dump another load of rubbish onto the heap.

“If you put bottles like me in your bin, we end up here, for hundreds of years!” said Susu, starting to cry. “And we break up into tiny poisonous pieces, which make the animals sick.”

Billy could barely look at the crying faces of the milk bottles staring up at him from the piles of rubbish. He was frightened and wished he was back in his bed with his teddy.

“Please take me home!” he cried.

“Only if you promise to help,” winked Susu, doing a somersault in the night sky.

“Bottles like me need to go into a special bin called a recycling bin,” said Susu. “Then we can be recycled and made into lots of other things, happy things, like swings, frisbees and yoyos. We won’t do any harm to anyone!”

Before Billy could answer, they were off again, hurtling at top speed across the moonlit sky. When Billy opened his eyes, he was back in his bed with his teddy and his mummy was calling.

“Billy! Breakfast! Your milk is waiting.”

“I think we should recycle our plastic bottles,” said Billy as he poured the last of the milk over his cornflakes.

“Why do you say that?” asked his mummy with surprise. “There is a special bin for that, a green one.  But it’s right at the end of the road and I’m too busy to take your bottles there.”

But Billy wasn’t too busy. After breakfast, he carried his empty plastic bottle to the special green bin, thinking about his dream and those poor milk bottles crying on the landfill. And then, just as he let go of the bottle, it gave him a wink and a smile and he went home feeling very happy indeed.